While the surgical resection of tumours is generally accepted to offer the best long-term solution, it is often not possible due the size, number or location of the tumour. Interventional Radiology therapies may be applied to shrink the tumour, making a surgical or interventional treatment possible.

Patients can greatly benefit from Interventional Oncology treatments. The minimally invasive nature of the treatments means they cause less pain, fewer side effects and shorter recovery times. Many of these procedures can be performed on an outpatient basis, thereby reducing costs. 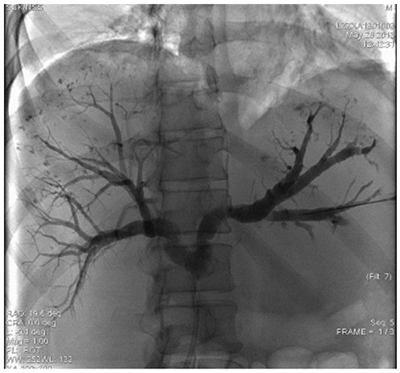 A small cut is made in the skin and a thin needle is passed through the skin into the liver and then into a bile duct inside the liver. Contrast medium is injected into the bile duct, which allows it to be seen on X-ray pictures. X-ray pictures or images are taken to see the path of the bile ducts.

A thin wire is passed through the centre of the needle so that it lies in the bile duct. A thin drain tube is then inserted over the top of the wire and into the bile duct. The tube has tiny holes along its length, which allow bile to drain past the narrowing.

One end of the drain tube will remain in the bile duct and the other end sits outside the skin where it is attached to a bag into which the bile drains.